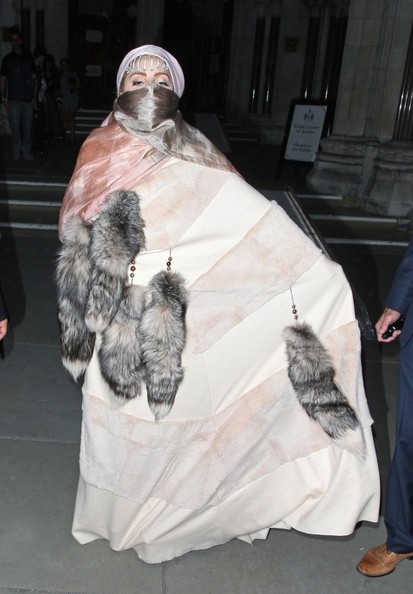 Ignoring for a moment the fact that this particular outfit looks like Gaga wrapped herself in a bedspread and then got attacked by wild animals, we need to talk about how with her latest burqa-wearing shtick, she’s planted herself smack dab in the middle of a long tradition of Westerners simultaneously hyper-sexualizing, othering, and dehumanizing Middle Eastern women. Her past fashion choices could be read as edgy social commentary, but with this she’s stepping into a realm where she clearly doesn’t understand the broader context of what she’s doing or the place it fits within a long history of exoticizing women while treating them as minor supporting characters in their own life stories. It’s not my place to speak for women of Middle Eastern descent, and rather than going into an academic discussion of all the reasons why this is incredibly problematic (read Edward Said’s brilliant “Orientalism” for a broader academic discussion of where things like this fit into the relationship between East and West), I’m going to tell a story.

My family comes from Pennsylvania Dutch/Anabaptist stock, and after getting chased out of Europe sometime in the 18th century, we settled down in Pennsylvania and didn’t budge for 250 some odd years, give or take a few decades.Various branches of my family tree were part of different plain Anabaptist sects, including Mennonites and plain Brethren, which means looking through old family photo albums includes pictures of great aunts in plain cotton dresses and prayer caps. I’m not clear on the time frame, but my grandmother spent the first years of her life as plain Brethren. For those who lack a reference point, think a more modern version of the Amish. Electricity, modern conveniences, but still dressing in a way that sets them apart from mainstream Western society. I’ll never forget the time we were visiting my grandparents when my grandmother overheard some tourists talking about how they were planning on driving around to basically gawk at the Amish (all the while mispronouncing “Amish” as “Aim-ish”). My grandmother jumped on those poor tourists so fast they probably didn’t know what hit them, first correcting their pronunciation, “They’re “ah-mish” not “aim-ish”, and they’re people, not tourist attractions,” she told them. It wasn’t just correcting ignorant tourists, it was the frustration that these people couldn’t see past clothing and a way of life to recognize that they were acting as though people—people not all that different than them—were people who were just trying to go about their normal lives and not entertainment like a living history museum or animals in a zoo. My grandmother wouldn’t have used the language of marginalization and of identity, but basically, in marginalizing and dehumanizing Amish people, it was her cultural identity that was being marginalized as well, even though you’d never know from looking at her that it was part of who she was.

Knowing how much ignorant tourists who would come to gawk at the Amish would bother my grandmother, I can’t get past Lady Gaga’s much more blatant (and significantly more baggage-laden) ignorant cultural appropriation. Rather than seeing past the clothing to see the people, she’s taken a piece of clothing that has already been used as Western shorthand for othering an entire culture and that has been imbued with massive political significance and once again drawn attention to the garment as a symbol while at the same time erasing the very real people with ordinary lives who wear the garment. She’s living out some sort of sexy Arabian Nights fantasy or something, but whatever it is, she hasn’t shown any awareness of the multiple reasons why it’s problematic and culturally inappropriate.

Note: I know the parallels between the clothing worn for religious reasons by various plain Anabaptist sects and hijab aren’t particularly strong, especially considering that my great aunts’ prayer caps aren’t held up as a political symbol. My mind goes to that parallel because on the occasions when I’ve gotten into discussions with people, the only thing that has remotely clicked in people’s heads was when I’ve analogized that they might as well make my relatives to get rid of their prayer caps, all the while feigning personal offense. I think it’s especially telling to the whole discussion that it takes me, a privileged white American, pretending to take personal offense because the same arguments could be applied to my Mennonite relatives, to get people to shut up and consider how offensive they’re being. So, if it helps you to understand why I have a problem with Gaga running around in a burqa, just imagine me being insulted because she’s running around in a sexed up Amish outfit without bothering to understand the implications of what she’s doing.