Well, I guess it was too much to hope for that Farris et al. would speak out against the egregious threat to the rights of gay parents in Russia. When a concerned former homeschooler asked him about it on his Facebook page, he pretty much blew her off by saying that because it wasn’t a homeschooling issue he wouldn’t do anything.

Funny though, how he doesn’t have the time and isn’t willing to take the effort to speak out against the proposed legislation in Russia to take children away from gay parents, but he did find time to be at the launch of Trail Life. Trail Life, for the uninitiated, is the organization that just formed as an alternative to the Boy Scouts. To be precise, it was founded as an alternative by those who do not like it that the Boy Scouts is no longer kicking children out of the Scouts for being gay. Note, the Boy Scouts still does not allow anyone over 18 to be involved with scouting if they’re gay, but that’s not enough for the Trail Life folks, if you’re not kicking kids to the curb if they come out, you’re caving into the pressures of the amoral left. 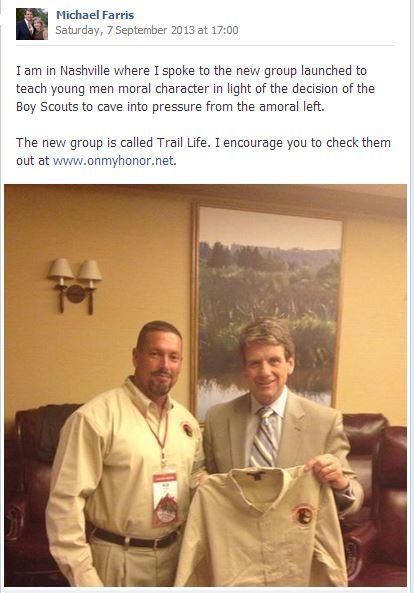 Again, let me remind you, no time to speak out against Russia wanting to take gay parents’ children away since it’s not homeschooling related, but plenty of time to go help launch a group that differentiates itself from the Boy Scouts by targeting children in the culture war. Yes, that’s what they’re doing. They’re putting kids in the cross hairs of the culture wars. It’s kids who are going to get booted out of Trail Life, it’s kids who they want to get booted out of the Boy Scouts. Kids.

Not surprisingly, Farris has a bit of a persecution complex about all of this. Here’s the relevant conversation from the comments on his post. 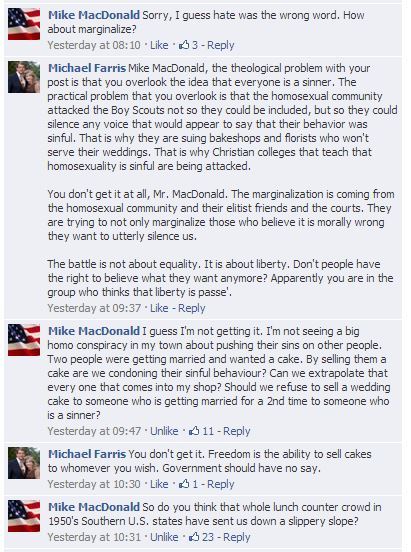 Two things here. The first is that as a K-12 homeschooler and homeschool graduate, I’m tired of the media treating Michael Farris as if he speaks for all homeschoolers. He doesn’t. He certainly does not speak for me.

Not just “we” in the abstract, “We the People,” sense either. “We” as in, the people his movement is fighting against aren’t some “other.” Mr. Farris, we are you–your family members, the kids who sang in the church choir and went to AWANA every week, who were trusted to babysit for other homeschoolers because we were part of the community, the homeschool kids who listened when you said that we were the generation who would change America.

You’re fighting so hard, but you aren’t fighting for liberty, you are fighting to deny liberty to people who are not so different from you.

Mr. Farris, it was your con law book for homeschoolers that inspired me as a teenager to want go to law school. I listened to you when you said that homeschoolers were going to change the country and I believed it. If I’m some activist elite, Mr. Farris, it’s because you and the homeschool movement created me. When I worked on an amicus brief in Perry and Windsor, it was because of the seeds you planted in me to go to law school.

We are not others, this is not us versus them, and it never has been, no matter how much you try to make it that way.