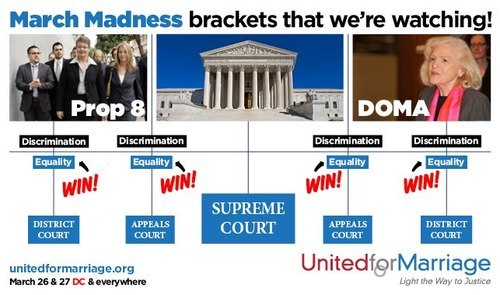 Sixteen and a half years ago President Clinton signed the Defense of Marriage Act, enshrining inequality into federal law. As Clinton tells it, he had to sign it because it was a veto-proof majority and any veto would have been overruled anyway, though I rather suspect that it had more to do with the fact that he was two months away from the general election and thought it would ensure his reelection. The truth is probably something that historians will have to sort out farther down the road. In any case, sixteen and a half years ago DOMA went into effect and the federal government was barred from recognizing the marriages of same-sex couples and from granting them any of the federal benefits granted to male-female married couples.

Four days from now, the United States Supreme Court will hear oral arguments on the constitutionality of DOMA, in the case United States v. Windsor. I was 16 when DOMA was signed into law, and if you had told me back when I was 16 that half a lifetime later I would find myself contributing to an amicus brief in the Supreme Court challenge of DOMA I would not have believed you. Not because back then I was still a member in good standing of the religious right, but because in my idealistic naivete I could not imagine that a law that seemed like such a blatant violation of equal protection would be allowed to stand for any measurable length of time. The idea that sixteen years later we’re all waiting on pins and needles, doing Supreme Court math in an attempt to guess whether or not DOMA will be overturned was something I didn’t even consider a possibility back then. And yet here we are, and most of my law school classmates are too young to even much remember a time before DOMA. Many of the respondents in the LGBTQ youth and young adult survey project that I coauthored and that was cited in this amicus brief weren’t even born when DOMA became law of the land.

I’ve written before about how my life today isn’t what I envisioned for myself as a teenager. Sixteen years isn’t a long time in the grand scheme of things, but in the course of those years I’ve found myself on the other side of the culture wars. Well, except that I was as sure back then as I am now that DOMA was a terrible law. Right now lawyers are busy prepping to argue Windsoron the 27th and Hollingsworth v. Perry–the Prop 8 challenge on the 26th, marches and vigils are being planned by both sides on both days, people are already camping out to get in the courtroom to hear oral arguments, and it feels like the culture wars are ramping up into full swing. Is it too much to ask that once this is over we put an end to the culture wars altogether and figure out a way to approach the issues of our day as grownups? I’ve been on one side or the other of the culture wars for more than half of my life and I’m tired of it. There may be other civil rights issues that arise down the road and disagreements to be hammered out, but there has got to be a way to ensure equal justice for all without tearing the country apart in the process.

And as for myself? I wouldn’t be a Covenant College grad if I wasn’t constantly trying to work out the ways in which my faith and life intersect–including speaking up when there are those who can’t. It would be kind of nice, though, to just be a boring patent lawyer in a world where there aren’t any culture wars anymore [joke about how the gay agenda is to pick up milk on the way home from work goes here].