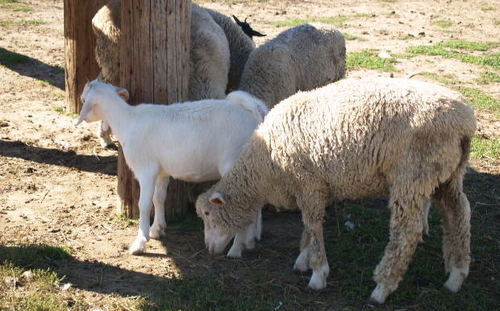 UPDATE: As of this afternoon, World Vision caved to their critics. I don’t blame them, I blame the people who forced them into the position where they had to choose between their projects continuing and keeping their policy change. What happened is shameful and tarnishes the name of Christ. I can’t emphasize just how unbelievably saddened I am about this turn of events and how the evangelical world demonstrated their willingness to use children, poor children, as leverage. It’s a dark day. My point below still stands.

31“When the Son of Man comes in his glory, and all the angels with him, he will sit on his glorious throne. 32 All the nations will be gathered before him, and he will separate the people one from another as a shepherd separates the sheep from the goats. 33 He will put the sheep on his right and the goats on his left.

34“Then the King will say to those on his right, ‘Come, you who are blessed by my Father; take your inheritance, the kingdom prepared for you since the creation of the world. 35 For I was hungry and you gave me something to eat, I was thirsty and you gave me something to drink, I was a stranger and you invited me in, 36 I needed clothes and you clothed me, I was sick and you looked after me, I was in prison and you came to visit me.’

It’s not really about the children, is it?

Ban same-sex marriage, fight against equal rights for LGBT people because protecting children is so important that it should supersede everything. That’s what they keep saying.

If there’s even the slightest theoretical chance that children might possibly be harmed, then we should stop everything. Children are the utmost importance.

That’s what they tell us.

The fight against gay rights is about the wellbeing of children.

It’s a good step, it’s the right step. The culture wars have been going on too long, and it is high time that Christian organizations focus their time and effort on things that matter.

Things like helping the poor. The orphans. The least of these.

44“They also will answer, ‘Lord, when did we see you hungry or thirsty or a stranger or needing clothes or sick or in prison, and did not help you?’

That’s how Jesus said the sheep would be separated from the goats. The righteous from the unrighteous.

Not based on the political party you vote for.

Not based on how hard you fight against same-sex marriage.

What you do to the least of these.

World Vision recognized that whatever else matters, wasting time and energy on squabbles that have nothing to do with the message of the gospel wasn’t going to do anything to help the least of these.

Naturally, the religious right has a problem with that.

I’m not going to dignify anyone by linking to their posts, but people are pitching fits. The Gospel Coalition, a site that has no problem with child abuse enabler C.J. Mahaney on their board, has run a piece attacking World Vision and treating it as altogether reasonable to withdraw financial support. American Family Association is calling for a boycott. I’ve been avoiding Facebook because I keep seeing the most horrible of articles making the rounds.

People are pulling sponsorship of children over this, over 2000 today by one count.

@kristenhowerton @micahjmurray my wife works for WV. In today’s all staff meeting Richard Stearns announced that so far 2000 kids dropped.

Let me repeat that.

And all because their hatred of gay people trumps everything.

Jesus did not say, “whatever you did to keep gay people from marrying, you did for me.”

It’s not about the children, not really. If it was, they wouldn’t be going against the direct teachings of Christ and hurting children out of spite.

You’re not a believer, you’re a whitewashed tomb, a self-righteous Pharisee so wrapped up in your external religiosity that you don’t care that you’re doing the exact opposite of what Jesus would do.

If this is what you think God wants, then I don’t know what god you worship, but it certainly isn’t the God who said over and over again in both testaments that His priority was to care for the widows, the orphans, the poor and the needy.

And don’t ever tell me that you care about the children.