Did you hear about the Kentucky off-the-grid homesteaders who allegedly had their ten children taken away because they were homeschooling? If not, you’ll probably hear about it soon, it’s rapidly going viral.

As the outrage machine kicks into high gear, here are seven important things you should know.

As with every other state, homeschooling is legal in Kentucky. The only requirements are that parents notify the school board of their intent to homeschool, and that they provide 185 days of instruction in the same subject areas as the local public schools. There are no assessment requirements, no curriculum requirements, no requirements that the children be working near grade level. Parents can meet the subject requirements any way that they see fit—including through unschooling, as Joseph and Nicole Naugler state they were doing.

Remember, child protection proceedings are not open to the public, so we have no way of verifying what the Nauglers are claiming is actually true. Just because they claim the children were taken away because of homeschooling doesn’t mean that’s why the police were called or why CPS got involved.

Nicole Naugler posted the following photograph of the CPS report in a private Facebook group. As you can see, unlike what the Nauglers are stating publicly, the children were not removed because they were homeschooling—the accusation that the children were not enrolled in school is
one small portion of a lengthy complaint.

Here’s the clearer version of the photo.

Notice that the allegations include the father threatening a neighbor with a weapon, that the property includes numerous piles of garbage, scattered broken glass and nails, and mention of the family residing in makeshift tents. The photos posted on the Nauglers’ Facebook page and blog back
up those allegations.

The following comments were posted either on Nicole Naugler’s personal facebook page or on the family page by people claiming to know the Nauglers. I cannot verify the veracity of the claims, but they certainly present a different narrative than the one presented by the Nauglers. (Note: these posts have since been deleted by the Nauglers)

Posts by another homeschool mom: 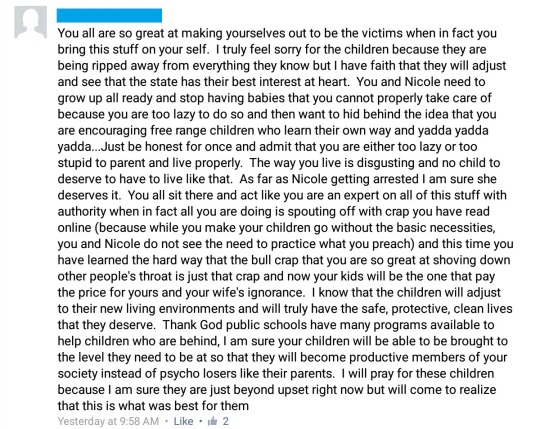 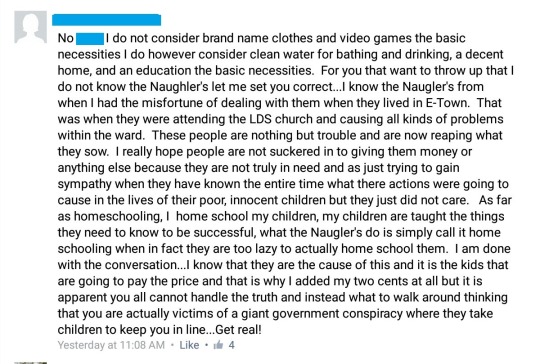 And, a comment left by an off-the-grid homeschool mom on the Relationship Homeschooling page.

The Nauglers have extensively documented their lives online, and the picture they paint on their
blogs and social media is of a family living in conditions that are quite troubling.

Before I continue, let me make it clear that I have zero problem with living off-the-grid. It’s probably not something I would do because I like my air conditioning a little too much, but I’ve got no objection to sustainable off-the-grid homesteading with children, so long as living conditions are safe and basic needs are met.

The Naugler’s “cabin” is a three-walled shanty, where they claim they put up some sort of 4th wall in the winter. They’re living in this shack with ten children, including infants and toddlers.

As you can see from the comments on this photo just posted to their facebook page, some people are confused as to whether this is even the cabin.

Here’s another photo, and again, remember that there are twelve people living in this shack, including small children.

And the inside of the “cabin.” As you can see, there are only three walls, and while they claim that they had a fourth wall up during the winter, we’re going to have to take their word for it. In searching all of the pictures on the family Facebook page, I was unable to find any photos of the “cabin” taken during winter that are anything other than close-ups of the children in bed.

The platform along the back wall is where the whole family of twelve sleeps.

Again, I have no problem with off-the-grid living, but this isn’t a cabin or even a tent, it’s a glorified lean-to with little protection from the elements.

You can see the rest of the photos here.

The Nauglers did have a prefab building placed on the property originally, which, despite being essentially a large, uninsulated shed, at least had four walls and sturdy construction. For reasons that aren’t explained, in August of 2014 they decided to return the prefab building and build what you see here. Again, this is how they weathered the winter of 2014/2015, one of the snowiest winters on
record across much of the US.

In her November 12, 2013 blog post Nicole Naugler wrote that they were contacted by CPS
just eleven days after moving into their prefab building on the property.

To be clear, just because you’ve had CPS called on you does not necessarily mean that you’ve done anything wrong. However, this does mean that they were on the child protective services radar over questions about their living conditions long before this allegedly vindictive call was made (if one even was made, again, we’re going by their version of events).

On her personal facebook page, Nicole Naugler states that several of her children don’t have birth certificates or other forms of ID. Homeschooling Alumni Reaching Out defines identity abuse as, “one’s parent, guardian or primary caretaker “not providing you with, withholding, or destroying any of your identification documents: driver’s license, social security card, etc.”

As the Naugler children are still minors, this isn’t as severe a problem as if they were adults whose identification was withheld, but it is a troubling sign none the less. This will make it more difficult for them to establish their identity as adults, as the stories of Alecia Pennington, Cynthia Jeub, and Eleanor Skelton demonstrate.

6. Previous run-ins with the law

Joseph Naugler has multiple arrests, including for passing bad checks and for driving
without registration or proof of insurance, and for failure to appear in court on those charges.

The Nauglers posted the audio of their interactions with the police online. I’ve mirrored it on Soundcloud because their hosting is overloaded. I encourage you to listen for yourself. During
the course of the conversation, Nicole Naugler told the officer that she wouldn’t report a neighbor for abuse even if the child was bloodied from beatings. The recordings also include Nicole Naugler refusing to answer in the negative when asked by the sheriff’s officer about whether they would use weapons against law enforcement.

It’s quite disturbing and the exchange raises the specter of another Ruby Ridge scenario. That’s not to say that the Nauglers would start a fire fight that involved their children, but listening to the audio on the ground, Nicole Naugler certainly did nothing to dispel the concern that the children were in imminent danger if police didn’t act to remove them from the situation.

Do these seven things justify the removal of the Naugler children? Ultimately, I don’t think we know enough about what is going on to make such judgments. The lack of proper housing is certainly disconcerting and would seem to justify the removal, but the Nauglers are not being forthright of
about whether they are or are not staying at this property and in which part. What these things do demonstrate, at the very least, is that this family desperately needs help and they ought not be lifted up by homeschoolers as martyrs for the movement.

Edit 10.05.2015, 04:45 AM, EST: It’s been fun kids, but I’m closing the comments. Making threats against law enforcement and child protective services crosses a line and I have better things to do with my time than monitor for threats of violence. This is why we can’t have nice things.