I’m not sure if two examples counts as a trend, but over the last few weeks both HSLDA founder and Patrick Henry College chancellor Michael Farris and well-known homeschool mommy blogger Karen “that mom” Campbell have both suggested that the blame, as it were, for LGBT homeschoolers lies at the feet of patriarchy.

Under this narrative, patriarchy has so harmed and broken us that we have not only rejected patriarchy itself, but have fallen off into a morass of sin and depravity.

Farris’ version of the story, as given in his May 2014 keynote address at the Florida Parent-Educators Association (FPEA) Leaders Forum, is that homeschool alumni critics of homeschooling are almost all victims of patriarchy, and in rejecting that we’ve also rejected God and some of us have become “open homosexuals.” It’s all very Romans 1 of him.

“But the majority, I think, are walking with God. A significant minority, however, have rejected God entirely. A significant number are way, way out there. And the– and the critics that we’re seeing arise from– in the homeschooling movement from young people who are in their twenties and– twenty– mid-twenties, mostly, is kind of the oldest group– that are loudly criticizing homeschooling on the internet and so on and in other venues– were almost all raised in these kinds of homes. And there is no pretense of Christianity in most of their lives. There are openly homosexuals involved, there are atheists involved, there are people that utterly reject everything that we believe in and make no pretense about it, that are– but they came. And so the idea that people are going to create generational, patriarchal family legacies, and we’re counting for them very well, you’re not seeing that. You erect a false view of God for your children, don’t be surprised if they reject God entirely. That’s what’s going to happen.

So what do we do as a movement? First, I would suggest we run as fast and as far away from patriarchy and legalism as we possibly can.”

Full audio can be found here.

Now, aside from the fact that Farris has painted all former homeschoolers who are critical of the homeschool movement as gaytheists who reject everything they’ve been taught, completely ignoring the significant number of critiques from committed Christians (myself included–”gay” and “Christian” are not mutually exclusive), and ignoring that gaytheists deserve a say too, this is balderdash.

While I will grant him the assertion that creating a hateful, vengeful image of God isn’t exactly conducive to producing children who believe in God, blaming our queerness on patriarchy, or at least the fact that we’re open about it, isn’t going to fly.

For one, patriarchy can’t turn anybody LGBT, sexual orientation and gender identity have zilch to do with the kind of environment you grew up in. What is particularly silly though, is the idea that being raised in an environment of fear, isolation, and repression where the odds are good that you heard at least one person suggesting that people like you should be stoned, somehow makes it more likely that Christian homeschool kids will become, “openly homosexuals.”

Although my own coming out experience was uneventful, at least in part because the days of my family’s dabbling in patriarchy by way of the courtship movement were long since passed, the kids raised in the kind of hardcore patriarchy that Farris condemns go through hell to come out. If only it were so easy as to just rage quit patriarchy and become “openly homosexual” in the process.

And well, I feel for the queer kid whose parents heard that talk and assume that by ditching patriarchy they’ll produce good little heterosexual children. Patriarchy doesn’t make a kid queer, and not following patriarchy doesn’t make a kid straight. The only relation that patriarchy has to sexual orientation or gender identity is to make the life of kids growing up queer a living hell. That’s not going to change in Farris’ ideal world since, as I have already documented, he advocates the same ideas that make life miserable for LGBT kids growing up in patriarchy.

I don’t particularly feel like getting into the bit in her post where she conflates Homeschoolers Anonymous/HARO with the organization that I’m part of, the Coalition for Responsible Home Education (CRHE), suggests that we’re some sort of gay rights advocacy organization (we’re not, and we have a grand total of zero mentions of anything LGBT-related anywhere in our policy positions), and then in the comments implies that our end game is to define being anti-gay as abuse (it’s not, and the idea literally never crossed my mind until she wrote it).

What I would rather talk about is the comment she left on her post, where Campbell suggests that young people raised in patriarchy, “can easily be convinced to experiment with homosexuality.” 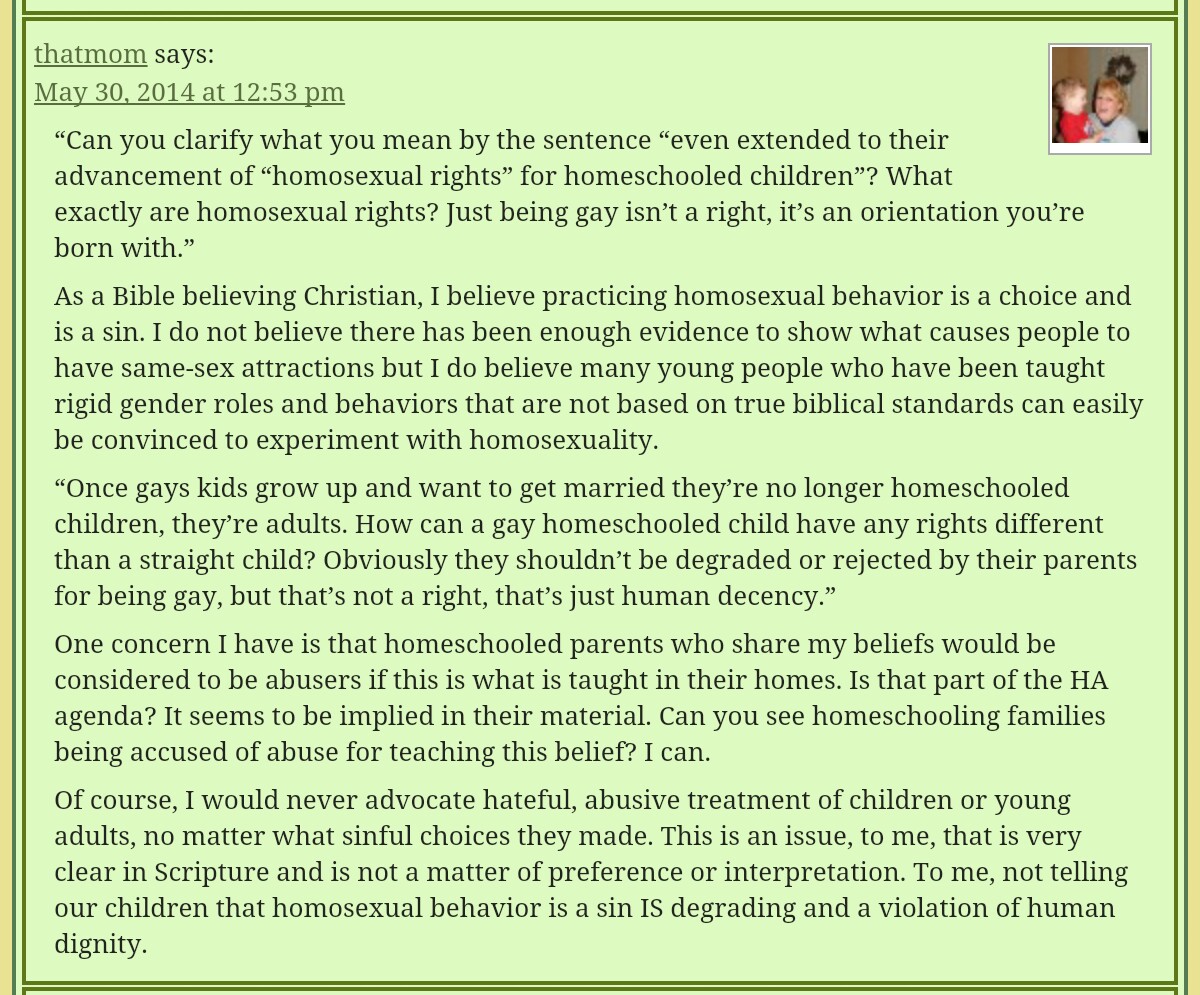 Ms. Campbell really doesn’t understand how this whole gay thing works if she thinks that being taught rigid gender roles is going to confuse someone into homosexuality. Also, while we’re at it, bisexuality is a thing too, though I doubt Campbell thinks it exists.

Rigid gender roles are bad, and should be rejected outright, but forcing a kid into a rigid gender role has nothing to do with who they’re attracted to. For that matter, there are kids who fit quite happily into rigidly defined gender roles but are still attracted to the same sex, and kids who don’t fit at all but who are entirely straight.

Homosexuality is about who you’re attracted to, and whether or not a kid fits into a rigid gender role is about gender identity and expression, another issue entirely. For a kid who is gender non-conforming, being forced into a rigid box isn’t going to confuse them into gayness, it’s just going to make their life unpleasant.

Besides, I didn’t grow up forced into rigid gender roles and I’m still queer. In fact, I’d wager that my parents’ version of homeschooling is one that would get the Karen Campbell seal of approval, but hey, here I am and no one convinced me into anything.

Are we so weak that she thinks we can easily be misled into gayness? I graduated from high school at 17, got a degree in computer science as the only female student in all but one class, moved overseas by myself to teach in Asia, and have my JD. That I could “easily be convinced” of anything, much less of something that makes my life harder, is insulting.

There are many things that I will lay at the feet of patriarchy, but nope, you’re not going to be able to write off LGBT homeschoolers this easily. Patriarchy did not make us, this is who we are, and there is nothing wrong with that.

We’re here, we’re queer, patriarchy had nothing to do with it, and it’s high time you get used to it.